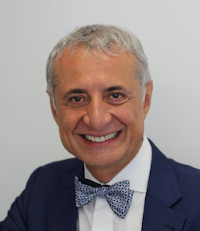 Professor Ali Darendeliler
BDS, PhD, Dip. Orth., Certif. Orth., Priv. Doc., MRACDS (Ortho), FICD.
Professor and Chair of Orthodontic
Head of Discipline of Orthodontics and Paediatric Dentistry
University of Sydney and Sydney Dental Hospital, Sydney South West Area Health Service
Professor Darendeliler is received his dentistry training from the University of Istanbul and his PhD from the University of Gazi, in Turkey and his first specialist training in orthodontics from the University of Geneva, Switzerland and his second specialist training from the High Education Council, Turkey. During the course of his career he has undertaken duties as a clinical instructor, research and postgraduate coordinator (Maître assistant et de Recherche) at the University of Geneva, Assistant Professor at the University of North Carolina, Research Professor at the University of Southern California. Prof. Darendeliler has been internationally recognised and awarded the highest honour that the European Society of Orthodontists can present, “Sheldon Friel Lecturer” for significant scientific contribution to orthodontics and the only Australian to have received this award. Australian Society of Orthodontists (ASO) awarded him the highest and most prestigious scientific recognition in Australia being “P.Raymond Begg Research Award” for outstanding original research paper, awarded to only seven people in the history of the ASO. He received a Distinguished Service Award from the ASO recognising his Long Service to the Society and Association. His postgraduate students received five international best research awards from the American Association of Orthodontists, European Society of Orthodontists and World Implant Orthodontics Association and also received 19 Best Research Awards and six best performing postgraduate student awards (out of eight nominations) in Australia. He lectured in North and South America, Europe, Asia, Africa and Australia. In addition to his research and teaching commitments he also maintains a private specialist orthodontic practice.
Abstract
It is always challenging to treat cases with ankylosed or missing teeth due to trauma, not only because missing teeth need to be replaced but also trauma mostly causes bone loss and this makes their management difficult especially in young patients. Management of trauma cases will be discussed in terms of treatment timing, types of treatment and possibilities. Ankylosis of anterior teeth in early ages due to trauma is also quite frequent and causes, aesthetic, functional, retardation of vertical growth and management problems. A new protocol for alveolar distraction of ankylosed upper incisors which was recently introduced at the University of Sydney will be described and discussed.

Copyright© 2018. Faculty of Dentistry, The University of Hong Kong. All rights reserved.

Copyright© 2018. Faculty of Dentistry, The University of Hong Kong. All rights reserved.