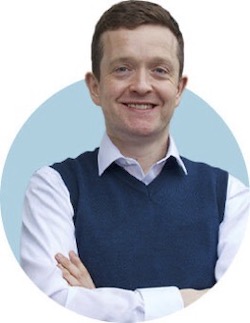 Dr. Finn Geoghegan
BDS(NUI), MOrth(HK), Morth(RCSEdin),PhD(ULon)
President Elect of the European Orthodontic Society (EOS) 101st congress 2026.
Following his graduation from Cork dental school in 2002, Finn held a range of positions in private practice and in teaching hospitals in the UK and Australia. He undertook specialist orthodontic residency training in Hong Kong from 2006-2009. He received his membership diploma in orthodontics from the Royal College of Surgeons, Edinburgh, in 2011. Finn then returned to the UK where he completed a PhD in orthodontics and developmental biology in the Centre for Craniofacial and Regenerative Biology in King's College, London, in 2017. In 2019, he was announced President Elect of the European Orthodontic Society (EOS) 101st congress in Dublin in 2026.
Finn has been a specialist orthodontist in private practice in Australia, the UK and Ireland since 2011. He is the principal orthodontist of a specialist orthodontic practice in Dublin, Ireland. In 2014, he received his "Approbation" to practice as a specialist in Germany. He continues to lecture in both Europe and in Asia/ His research interests focus on the basic science and clinical components involved in craniofacial development as well as orthodontic materials.
Awards
Cosgrave medal, Irish Dental Association (IDA)
Charley Schultz resident travel award, American Association of Orthodontists (AAO)
WJB Houston memorial research scholarship, European Orthodontic Society (EOS)
Abstract
Digital dental technologies for impressions, treatment planning & progress monitoring, appliance design, 3D printing and manufacture is transforming thousands of dental practices and labs worldwide. As CAD/CAM continues to replace traditional workflows and become the standard, digital solutions have become a necessary consideration for any orthodontic treatment.
What are the benefits of going digital? How are the workflows different from analogue processes? What are the best strategies for getting started? Finn tracks his journey over the last two years.